When do you realize that you need a vacation? Is it a feeling you get or is it when work gets so hectic that you need a break? If you’re a creator, do you feel like traveling to get a fresh perspective on your work? For me, as a creator, I need to travel for my own sanity. My work-life is good, but about a month ago, I was facing a writer’s block from a creative standpoint and I felt that a solo trip to a warm and refreshing place would benefit me.

After narrowing down a few cities, I decided on going to San Diego for my first solo vacation of 2019. I’ve traveled there before with my friends but as it was almost two years ago and only for a day or two, I didn’t remember much of it. Also, Denver and the east coast was getting too cold for me, so San Diego was the perfect option!

When I started planning my trip, I realized that all the places that I wanted to visit weren’t really North or South – they were everywhere. So, finding a centrally located hotel was important to save on travel time and cost. The Sheraton San Diego Hotel & Marina was the best choice as it was central and extremely close to the airport. It was so close that I could see and hear flights take off and land. They also have a hotel shuttle that picks you up from the airport and drops you off for free!

A few hours after I landed in San Diego, I started my solo trip by visiting Old Town San Diego which is the oldest settled area in San Diego. The thing about this place is that there aren’t specific spots where you can spend some time. When you walk around this neighborhood, you’ll notice many restaurants, over 100 specialty shops, and about 25 historic buildings like the Whaley House. I spotted this beautiful spot which I thought was a house but turned out to be a soap-shop!

After about 45 minutes, I took an Uber to the Cabrillo National Monument which is at the southernmost tip of Point Loma and commemorates the landing of Juan Rodriguez Cabrillo at the San Diego Bay. Apart from its historical significance, you’ll get some amazing views of San Diego’s skyline, the Pacific Ocean and even Tijuana’s Coronado Islands on a clear day!

The Old Point Loma Lighthouse is literally at the mouth of the San Diego Bay. The lighthouse isn’t in operation anymore, but it’s open to the public as a museum. Although I had a time-limit here because it was getting close to 4:30 pm and the gate closes at 5 pm, I decided to quickly walk up to see the lighthouse. I was surprised to know that you can actually go up the lighthouse to view different rooms where the locals lived.

My sunset-viewing point for today was the Sunset Cliffs Natural Park; about 25 minutes from the Monument. There’s a 3-mile (4.82 km) trail along the coast and multiple points from where you get breathtaking views of the Pacific Ocean. I didn’t do the entire trail but went to a few spots and just waited it out until sunset while listening to some good music. 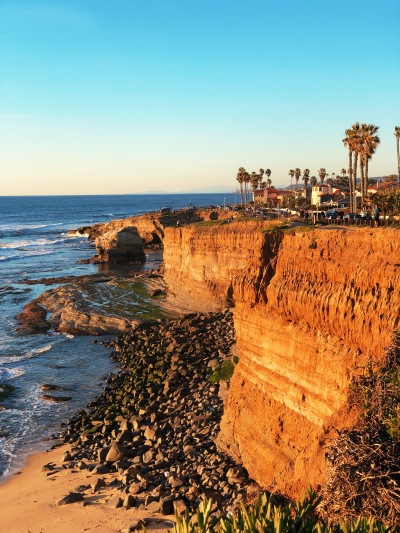 When I was in school, I was addicted to playing Sea World’s game on my desktop and it was always my dream to visit it someday. Of course, I wasn’t going to go on any of the rides because they make me nauseous, but I was so excited to go for all the animal shows! Even though I was alone amongst all happy families, I laughed my heart out and enjoyed each moment to the core.

I left by 3 pm to check out the La Jolla Cove which is known for its very rich marine life and the good part is that you can see some of it outside the waters too! There are a ton of sea lions, seals and birds on a particular spot called the Seal Rock. Although they’re not too dangerous, don’t go too close to them. I saw a lot of folks getting too close to them for pictures, and it’s all okay in the moment but you never know how the seals might react!

Another interesting place I saw out there is the Sunny Jim Cave. It’s been open to the public for a long time and you’ll see people boating out there. It’ll be lovely during sunrise or sunset and there’s a nominal fee to get there. 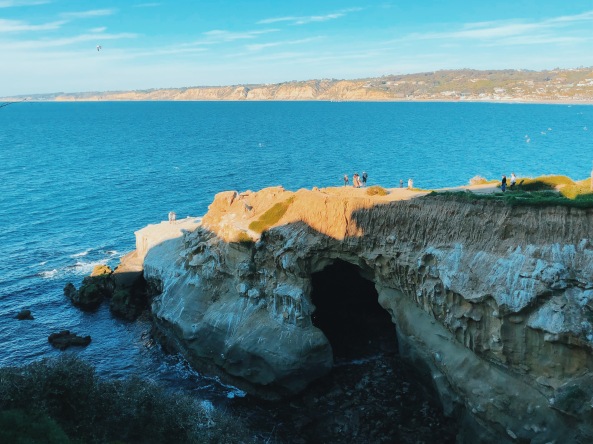 Sunset spot for the day was the Scripps Beach, specifically the Ellen Browning Scripps Memorial Pier. It was about 2.3 miles (3.7 km) from the La Jolla Cove and I decided to walk it out (little did I know what was going to happen the next day, lol).

My sole reason to visit this beach was to get a really cool shot of the pier with the sunset in the background. Even though it’s known to be quieter than La Jolla Shores, there were quite a few people lined up under the pier to get a good picture. I’m not kidding, I waited there for 30 minutes in the cold wind to get a good shot but it was worth it! 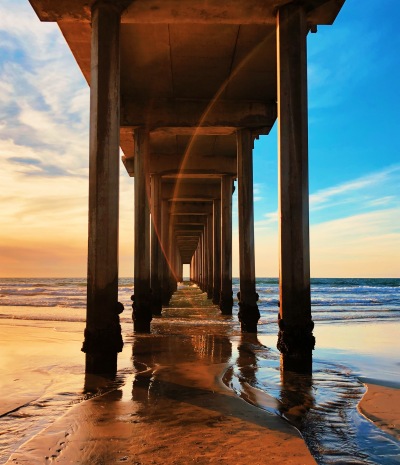 I started my day with some Holy Matcha. Yep, that’s the name of a gorgeous café in San Diego that has everything matcha – even donuts! It’s one of those Instagrammable cafés that’s healthy and yum at the same time. After reading my book here with some hot matcha latte and a matcha donut for an hour, I made my way to Balboa Park.

Balboa Park is a 1200-acre park in the middle of the city that houses many open space areas, gardens, museums, theaters, and the world-famous San Diego Zoo! I started walking from the northern end of the park and made my way to the Spanish Village Art Center where you can see artists while they’re creating their work.

I then walked to the Botanical Building which is quite photogenic. There are a ton of museums and theaters around this Building but it’s nice to just stroll around this area too. 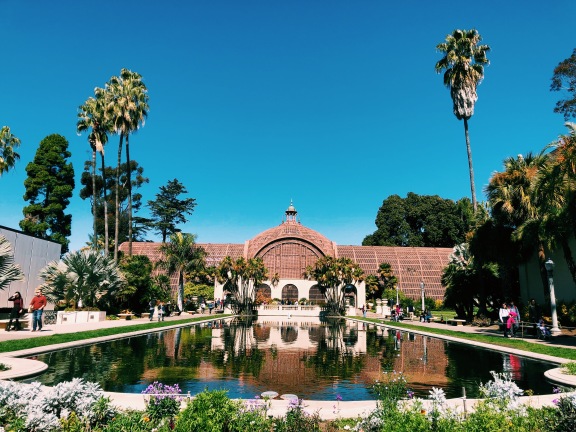 The Botanical Building at Balboa Park

After Balboa Park, I walked to Downtown San Diego to check out the Gaslamp Quarter. It’s a lively neighborhood, mainly known for its nightlife. 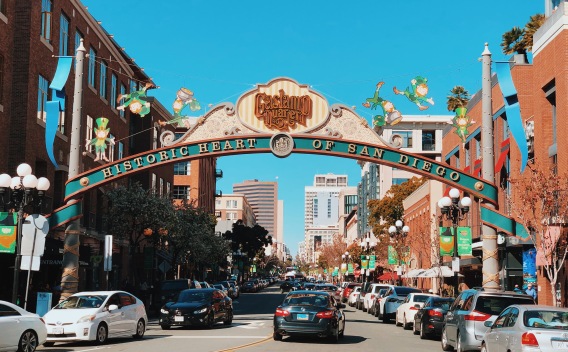 By this time, I had a painful leg sprain (I wonder why) and decided to head to a wonderful café called the Grounds Bean Bar in the Pacific Beach area to relax before sunset. 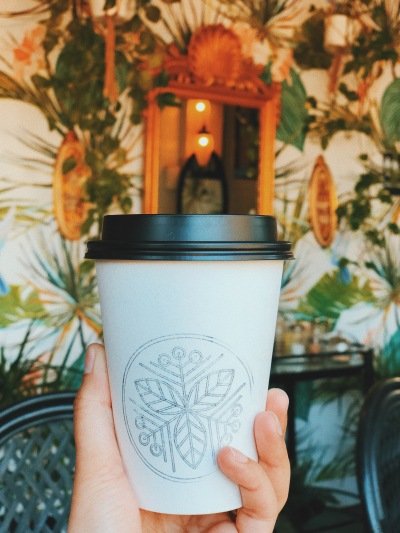 While I was at the café, I was selecting my sunset spot for the day. I came across the Windansea Beach which is lesser known but has a hut by the rocks. It wasn’t too far from the café by road, so I decided to walk around a bit and then take a cab to the beach. 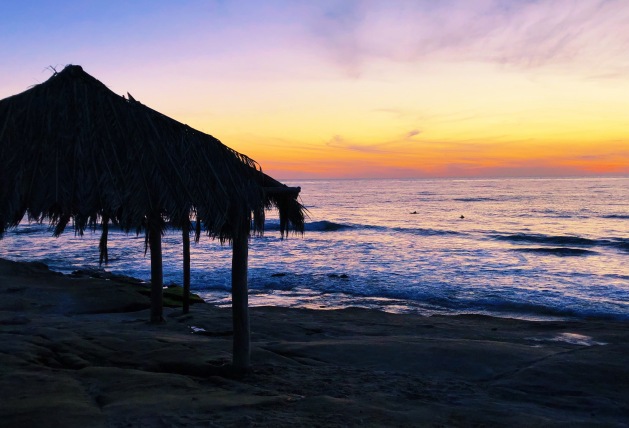 The reviews on Google were quite accurate for this beach – stunning and not many people around. There were a couple of photoshoots right under the hut before sunset but that gave me some time to set up and find the right angles. This sunset was a splendid end to this day.

Based on my original plan, I was supposed to fly somewhere else today, but because that got postponed, I had an extra half day at San Diego. Although that’s good news, my leg hadn’t completely recovered so I decided to take it easy. I went to Café Gratitude for brunch and to get some work done. It’s a completely plant-based café and even has some gluten-free options!

I then walked around to see the Ships around the area like the Star of India and HMS Surprise and then headed back to my hotel to pack up and leave. I purposely left out the USS Midway Museum, so I have something to come back to!

On my way to the hotel, just for giggles, I checked how much distance I had walked over the past three days. I wasn’t too surprised (it was 22.6 miles or 36.37 km), but it was nice to know the number and the reason for my leg sprain :P.

Things to keep in mind!

Guess what? The trip helped! My mind was fresh after the trip even though I was physically very tired. On my flight back home, I finished writing my Mumbai blog which I was struggling to write before the trip. It’s true what they say,

“Almost everything will work again if you unplug it for a while. Including you.”

7 Comments on “A Perfect Weekend in Sunny San Diego”