Only two weeks after I joined Deloitte, they asked me to fly to Chicago for a training. A free business trip to a place that I haven’t seen before where I get to meet some of my undergrad college friends? I’ll happily take it! I was going to meet Savvy, one of my closest friends, after three years. I also made plans to meet Akshay and Savio, two of my friends from my undergrad school.

I got my new iPhone X just a day before I flew to Chicago and was too excited to take photos with it. On the first day when my friend and I were returning back to our hotel from the office, I dropped my phone. Good job, Ishita. The first day in Chicago and you’re off to a good start.

How did I get there?

I flew into the Chicago O-Hare International Airport. It’s one of the busiest and most crowded airports I have seen. It took me more than an hour to get to my hotel by road because of heavy traffic. Chicago has another airport; the Midway Airport. Though there are limited flight options to this one, it’s favorable as it’s less crowded and you won’t encounter much traffic to get there.

I stayed at the JW Marriott in Downtown Chicago. This hotel is huge and I loved my stay here. The location was good as well; as I could walk to most of the touristy places.

Where did I eat?

This is all I’m going to tell you – Nutella and deep-dish pizza. And, there goes my diet.

I only had evenings to explore Chicago because of my work. Considering that, I think I covered some of the iconic places that are a must-see!

Who has been to Chicago and NOT seen the Bean? No one, I hope. The iconic bean, also known as the Cloud Gate, is located in the Millennium Park in Downtown Chicago. It was a little difficult for me to locate the bean in the park but after some guidance from the locals, I was right in front of the bean staring at the beauty that it is! It’s fun to walk from under the bean and look at your reflection on it. If it’s difficult for you to find the Bean too, know that it’s right opposite the McCormick Tribune Plaza which is an ice skating rink.

The Chicago Riverwalk is also one of the iconic spots in Chicago that you have to visit. It’s a long one so you can choose any spot, really. I went to multiple ones but the one that I loved the most was the one near the Chicago Tribune. It’s beautiful and I love the small bridges that connect you to the other side of the river. I also saw the Apple store, considered to be the largest in the United States, right at the banks of the Chicago River.

One of my friends recommended that I should go outside the Adler Planetarium as it gives you the perfect view of the Chicago skyline. No doubt he was right. Apart from the fact that my friend, Mona, and I were about to fly away because of the strong winds, the view was purely stunning! We could barely get our hands out of our pockets – the wind was that bad. But, we somehow managed to get some clicks of the skyline at the golden hour and of Lake Michigan. 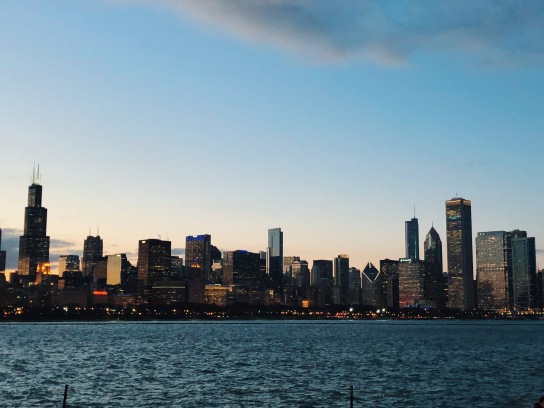 Glass Balcony at the Willis Tower

Scared of heights? Haha, you’re going to have a wonderful time here! 😛 The Willis Tower takes you 110 floors high and then there’s a long line to get to the glass balcony. What is that, you ask? This balcony is covered in glass on three sides – front, up and down. Now, you must have been in glass buildings that have glass above and in front of you. But standing on the glass on the 103rd floor – that’s something else. Thanks, Mandar, for letting me clench your hand for this one. 😛 It was a thrilling experience! We took pictures standing and sitting in a matter of 30 seconds (that’s all the time you get) and here’s the result!

View of Downtown Chicago from the 103rd Floor

View of the City from the 94th Floor

You may wonder – why go to two towers in the same city? Well, I went to the Willis Tower during the day and the John Hancock Tower in the night. And let me tell you, you won’t regret going to both. The John Hancock Tower, also known as 360 CHICAGO observation deck takes you to the 94th floor and offers you a view of Lake Michigan. Along with this, they also have the TILT on the 94th floor. It’s a thriller ride which is essentially an enclosed platform that tilts out over Michigan Avenue. The glass balcony at Willis Tower was enough of an adventure for me so I skipped the ride.

Lush Cosmetics at the Magnificent Mile

The Magnificent Mile is a one-mile stretch on Michigan Avenue which is a treat for all you shopaholics. You’ll find all sorts of brands here – right from Zara and Topshop to Burberry and Tiffany & Co. I spent some time here in the evening to unwind from a long day at work. There’s a reason they call it “Retail Therapy”, right?

Things to keep in mind: 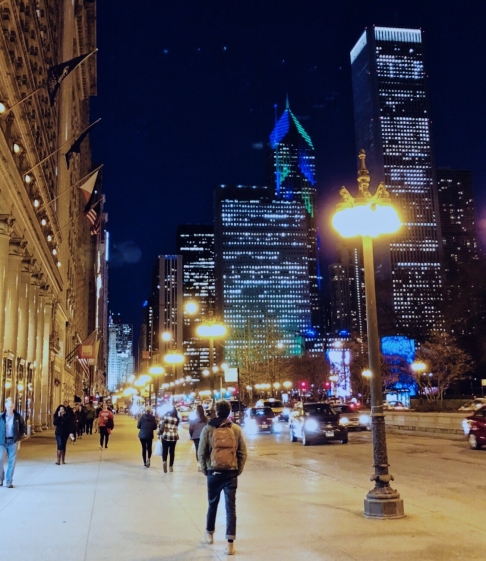 Would I visit the windy city again? Of course! There are some more places and restaurants that I would love to go to but couldn’t because of my work schedule. Next summer, maybe! 🙂

Have you been to Chicago? Tell me some places that I should go to in my next visit in the comments section below! If you haven’t been to Chicago yet let me know what places you would like to visit! 🙂

10 Comments on “Chicago: The Windy City”